Dying of thirst: The pending death of the Lower Klamath National Wildlife Refuge 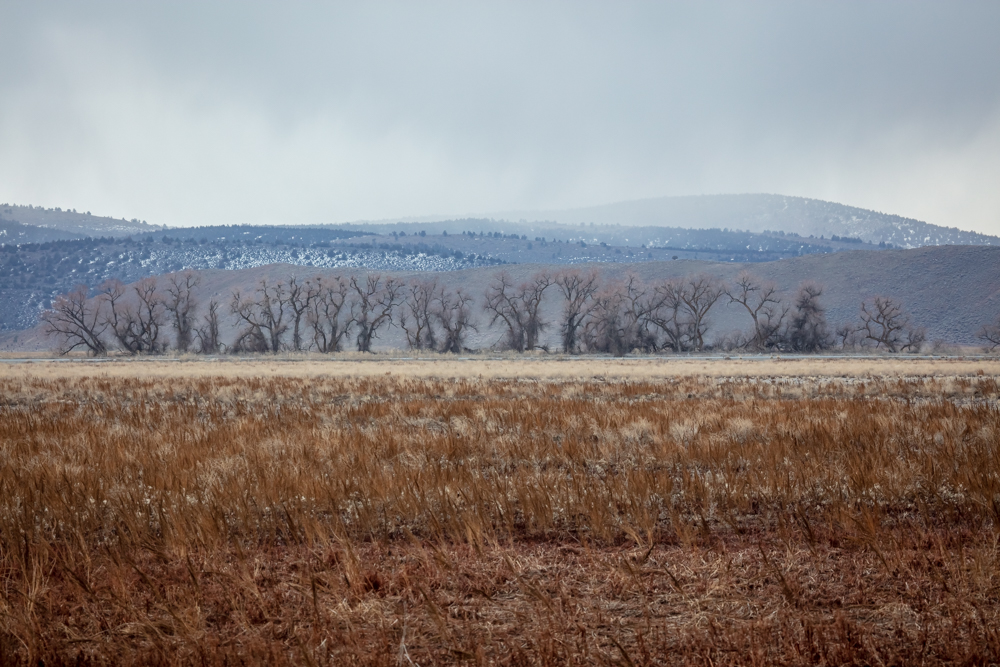 Susan and I have made it a ritual to visit the Lower Klamath National Wildlife Refuge and Tule Lake National Wildlife Refuge each year around valentines day. Since our initial visit in 2009, we have visited the refuge complex 17 times. Each time we visit we see new wonders and notice interesting changes. Our last visit left us wondering if it will survive as drought leaves the refuge dying of thirst. 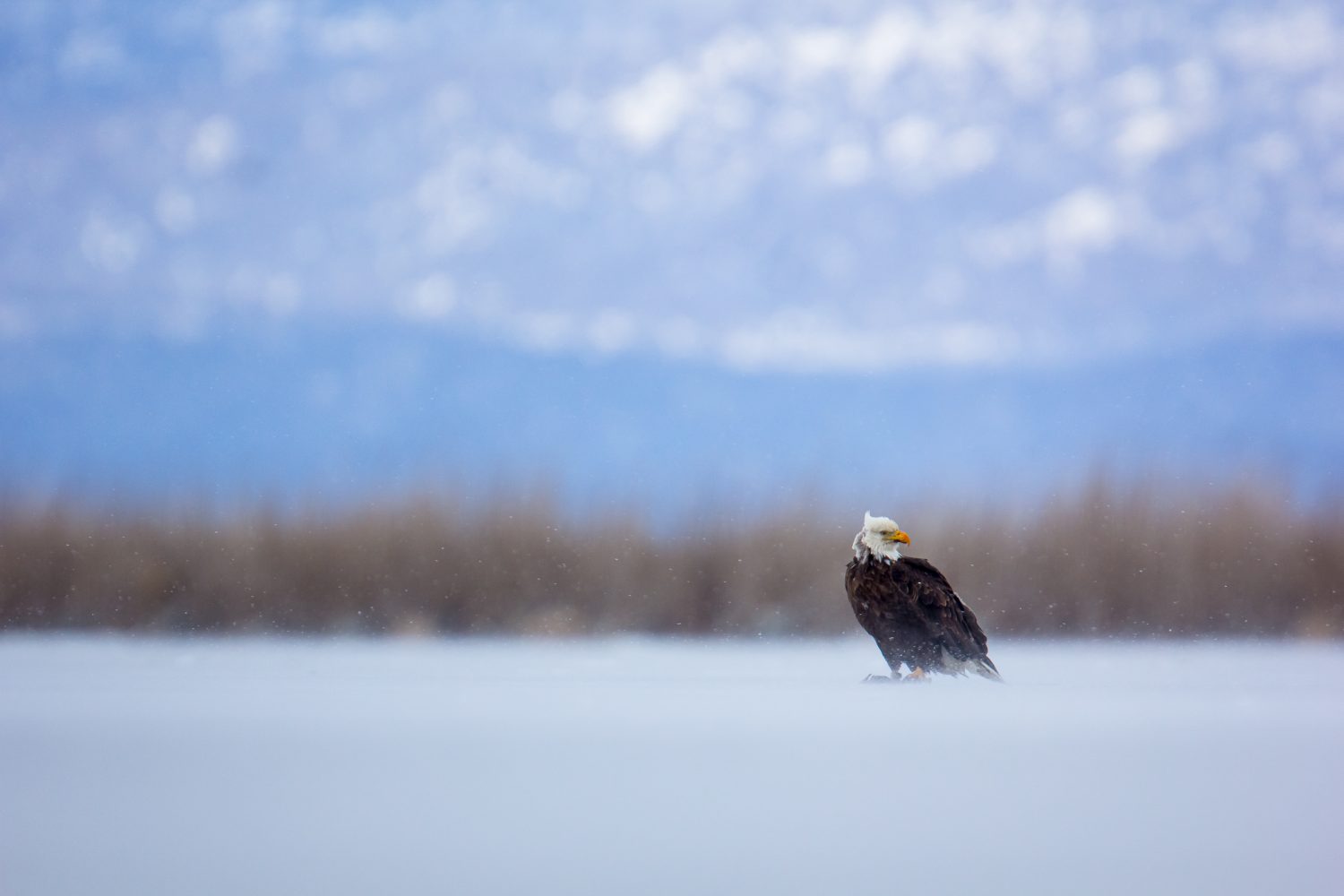 In our early visits the lakes and waterways were often frozen for the greater part. A narrow band of open water concentrated the birds and gave sight to some amazing gatherings. Massive flocks of Snow Geese, Greater White Fronted Geese, Swans and a variety fo ducks were within easy reach of our telephoto lenses. 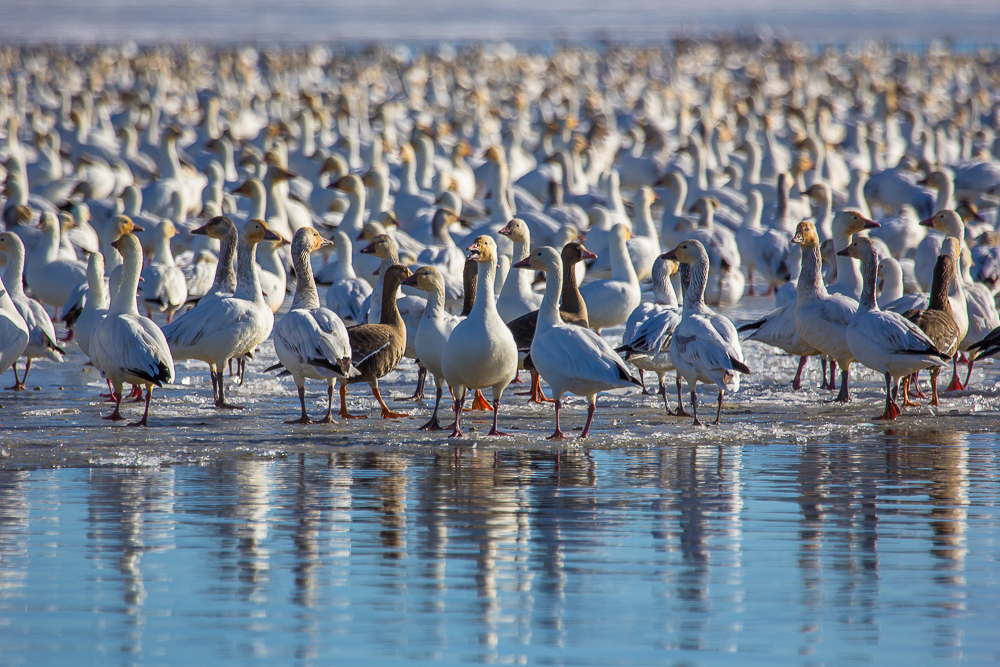 A gathering of geese take refuge on the frozen waters edge on the Lower Klamath National Wildlife Refuge. 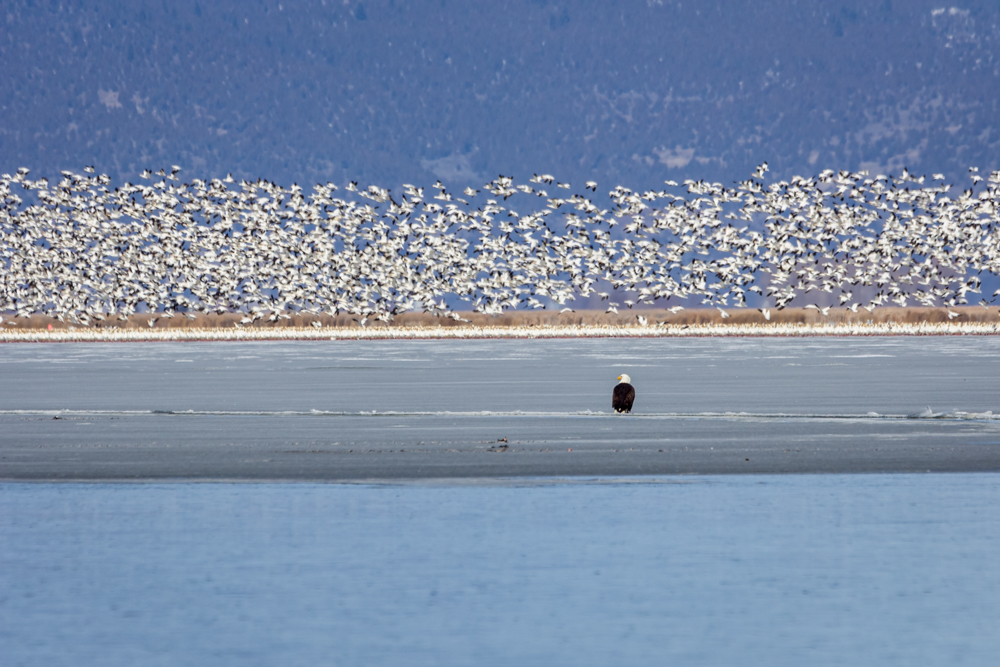 The interplay of predator and prey was to be seen through out the refuge system. Here a Mature Bald Eagle rests on the ice as a large flock of Snow Geese take flight in the distance. Tule Lake sump#1 February 2013.

Over the years we began to notice that the waters were not freezing over as they used to. This gave the impression of fewer birds though I suspect it was simply that they were spread out over the entire area not being concentrated by the ice. It made the photography more challenging but still offered lots of opportunities.

Without the ice as a barier, ducks could swim out of range of our cameras. Tule Lake, with it’s sumps being large open expanses, became less productive for our imagery. Lower Klamath, however, remained a hotspot of imagery. 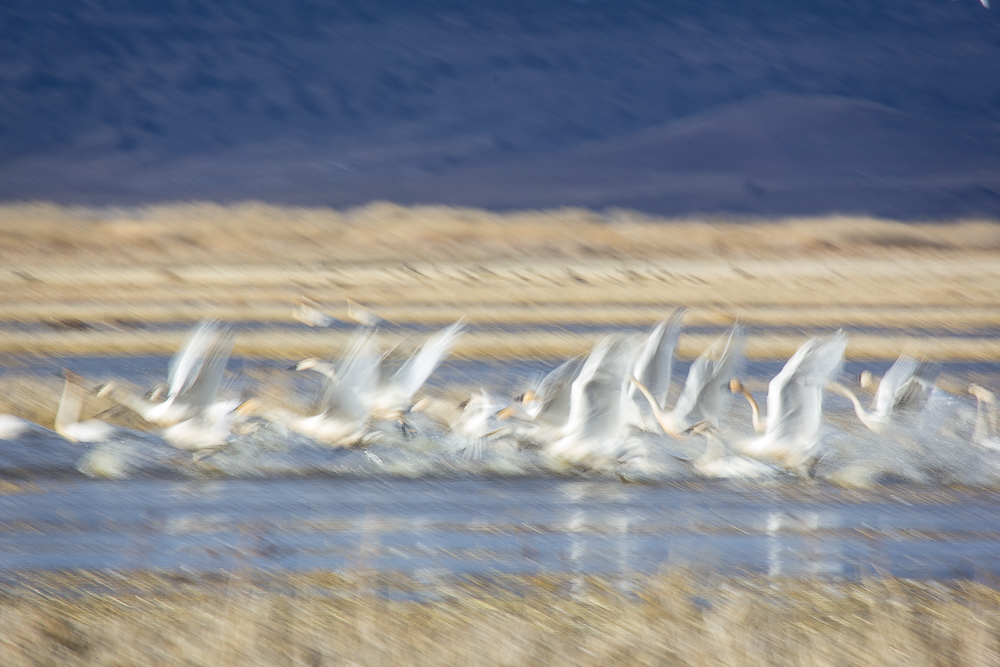 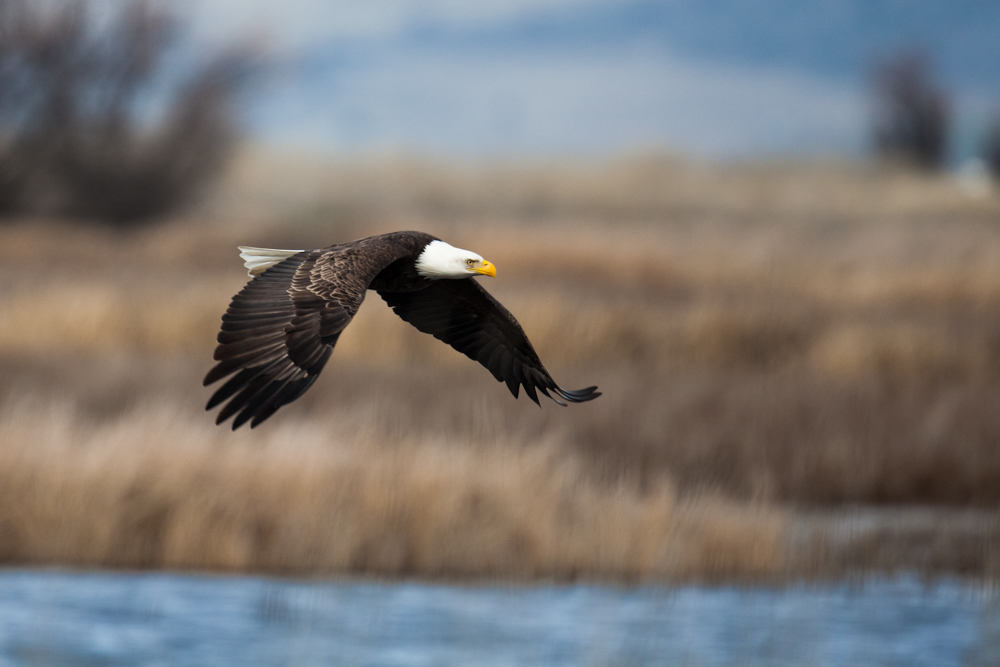 A Bald Eagle flys along one of the canals on its way to a favored perch. Lower Klamath National Wildlife Refuge February 2015. 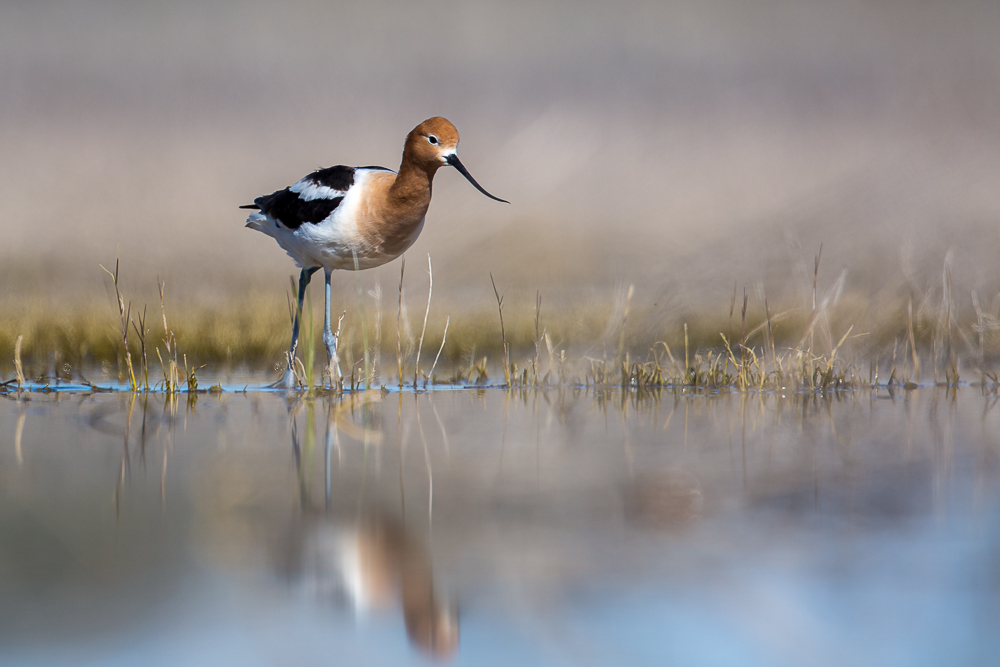 American Avocet from the many we observed on the White Lake unit of the Lower Klamath National Wildlife Refuge during a spring visit. May 2016.

Over the course of a few years we witnessed a change in the refuges that now I realize was very substantial. When we first started going there, we dressed in snow pants and heavy insulated boots. We drove on frozen roads. As these years slipped past we found ourselves driving in mud and then on dusty roads. Our attire became much lighter and varied. Of course, since wildlife remained present in good numbers, we thought it was not a big deal. We were just getting lucky on the weather.

While we remembered the days of frozen lakes and yearned for those aides in bringing the birds close, we relished the pleasant temperatures and enjoyed out photography. 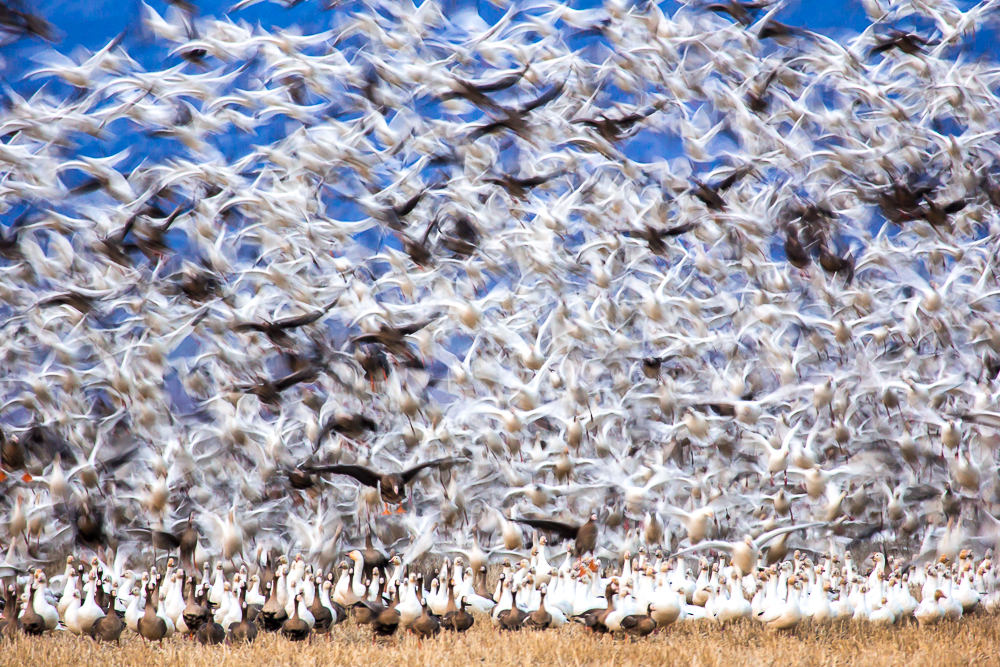 Even with the changing conditions, we enjoyed good numbers of wildlife such as this massive flock of Snow Geese with a few Greater White Fronted Geese mixed in. Lower Klamath National Wildlife Refuge February 2015.

We missed a couple years of visiting the refuges. When covid struck and life at work changed, we found ourselves traveling less. Our annual visit got cut and it wasn’t until February of this year that we returned. We were not prepared for what we found! 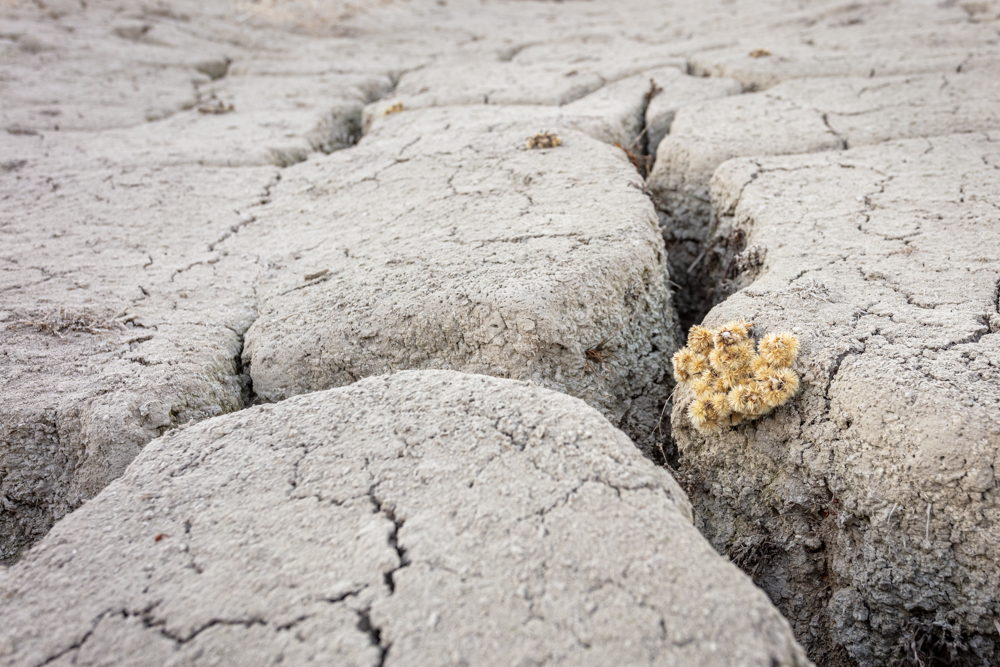 The muddy sediment in the bottom of one of the canals on the Lower Klamath National Wildlife Refuge had dried and cracked. February 2022

The Lower Klamth National Wildlife Refuge was established by Theodore Rosevelt in 1908 and was the first of the great waterfowl refuges. It was/is an important link in the pacific flyway and nearly 80% of the waterfowl that migrate along this flyway sue the refuge. It was designated a National Historic Landmark in 1965.

One would think that, with such a status, the refuge would be the top priority for water in the area. However, there are other interests. The Klamath River is host to a few species of fish that are on the endangered species list. Their need for water is a top priority for the local Native American tribes and, with the endangered species act at play, this need is first in line for water. The local farmers also need water for their crops and have a standing agreement for water rights. It is only after these two needs have been met that the refuge gets a drink.

In its hayday, the Lower Klamath NWR had a peak of nearly 4 million ducks counted in the peak fall duck count. In 2021 it was but a couple hundred thousand. By the time of our visit in early 2022, we only saw Blackbirds, Coyote and a few Sandhill Crane. The few ducks and geese we observed were in farmers fields.

Recently private land owners, the Klamath Drainage District and Ducks Unlimited have worked with USF&W to obtain more water rights. Will it be enough to save the refuge? What we saw on our visit leaves me doubting it. Much more will need to be done. 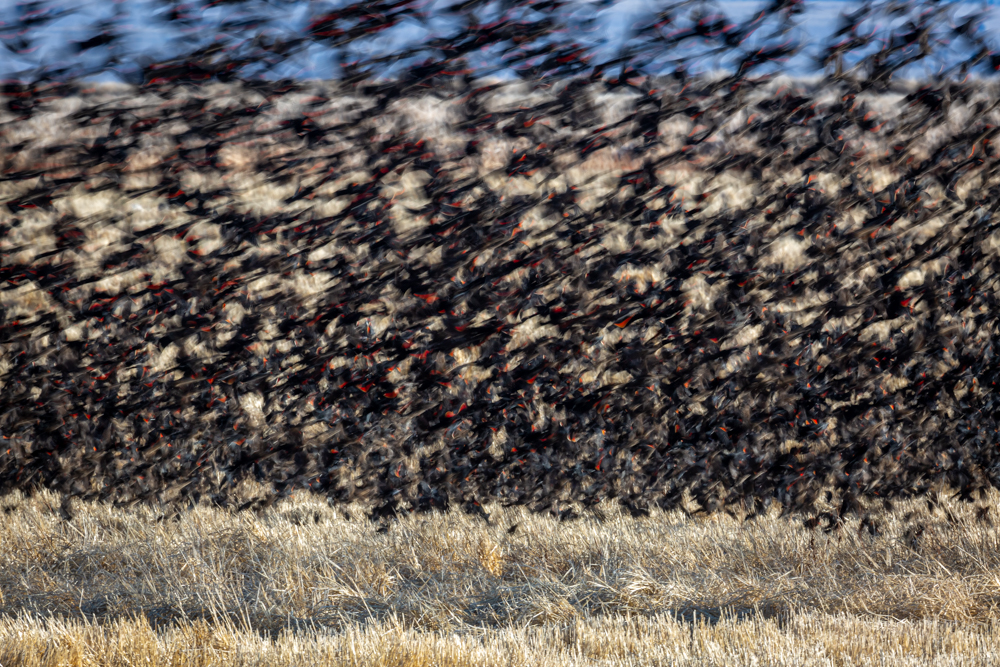 Redwing Blackbirds fly in the stubble of a wheat field along Stateline Road. February 2022 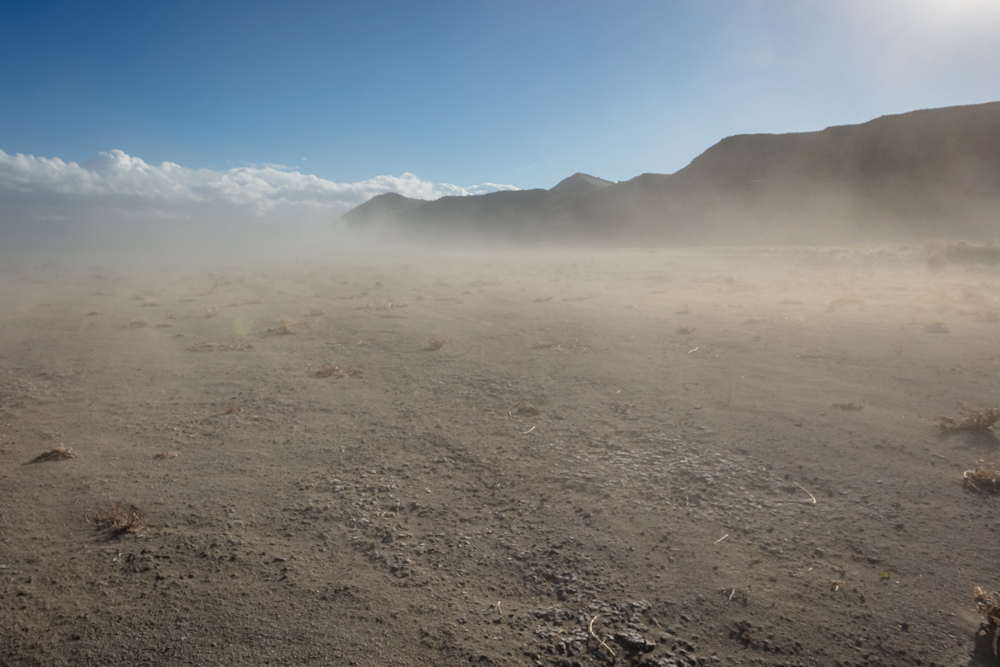 It used to be an open expanse of water. Tule Lake February 2022 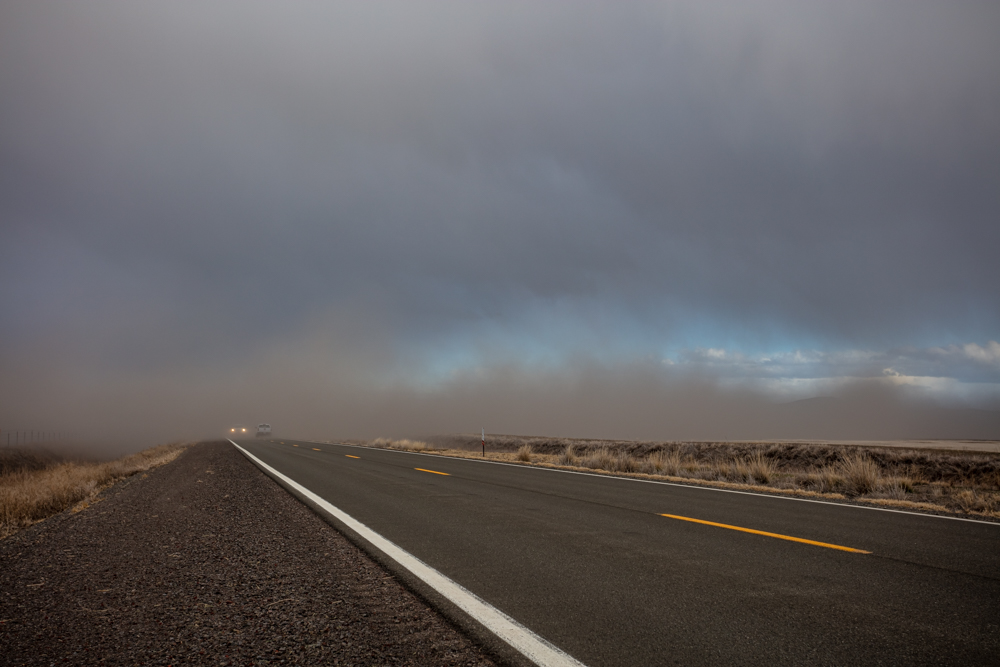 Dust (aka top soil) from over worked fields blow across Stateline Road creating a brown wall that requires headlights and slowed speeds to pass through. February 2022 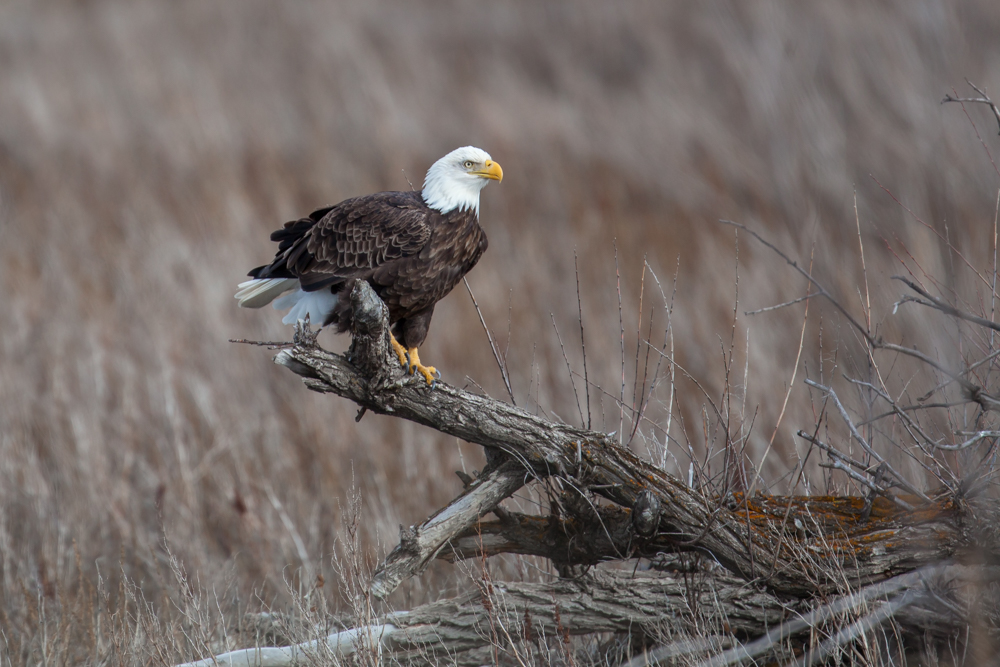 A Bald Eagle on a favored perch. February 2015 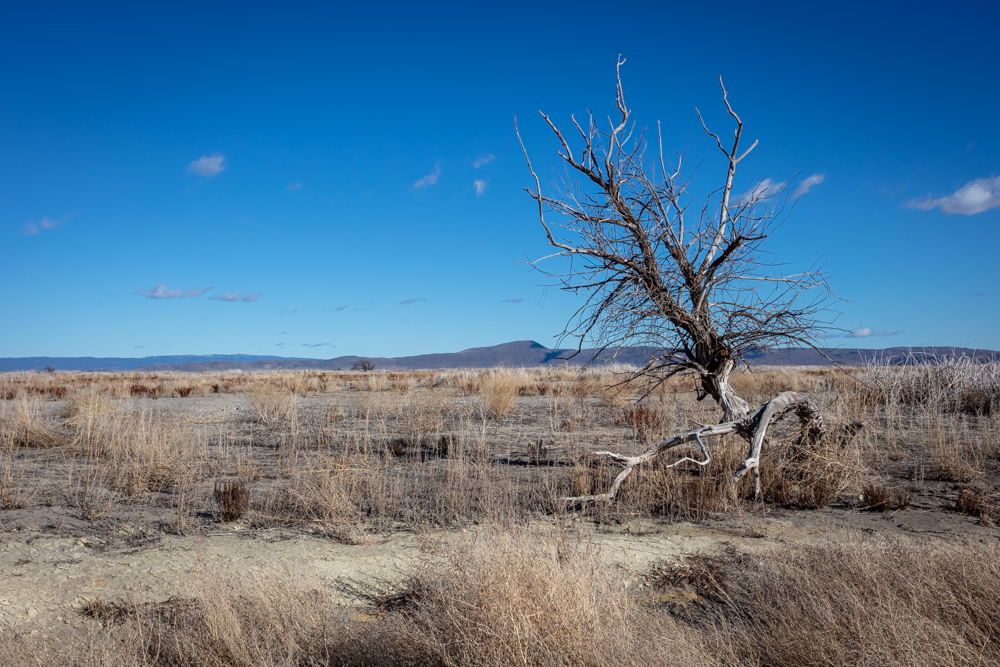 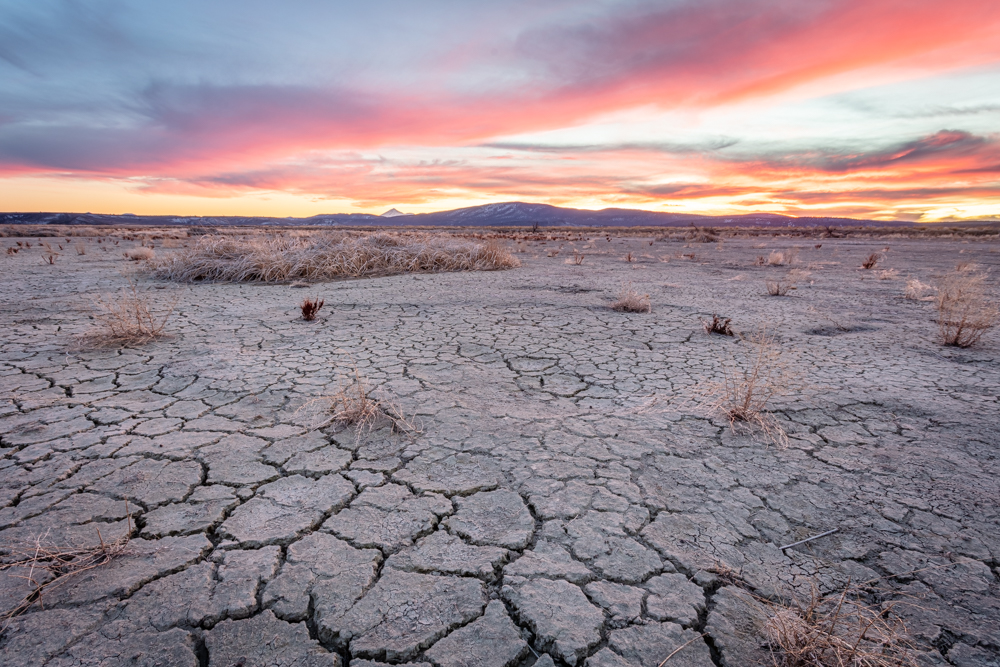 Parched land that used to be rich wetlands. February 2022 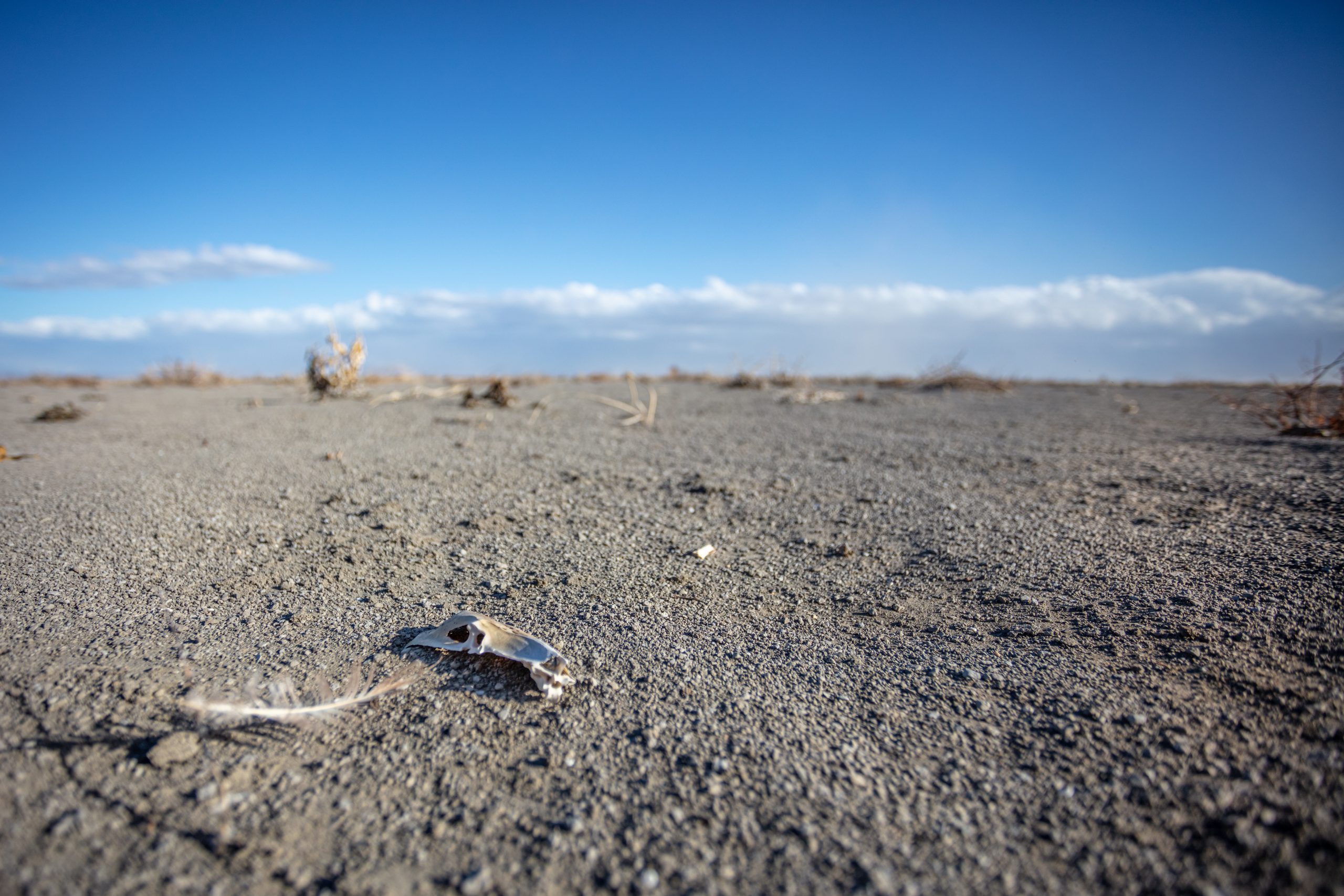 Is it too late? What happens if this crucial link in the pacific flyway disappears? Will the waterfowl be able to adapt? Will we rise to the occassion and save the refuge? Only time will tell.